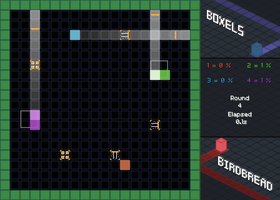 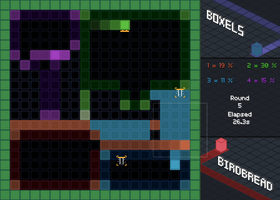 The project I took on this was in fact started in December 2016, for 1GAM... but of course, it didn't take a month to finish, nor did it even look remotely like the same game, or same kind of game at that point even. Spurious work on the game followed in the time between then and now but nothing decisive and it was certainly really never in any form to be played independently, so Devtober showed up and gave me a chance to go down the final stretch!

In the end, I managed to get both more and less done than I imagined I would in the end, throughout devtober I'd endeavoured to try and work on the game a little every day of october (though having started on the 4th of October, when I found out Devtober was a thing at all).

This.. more or less worked out, the first two weeks it was mostly smooth sailing and I even tweeted a little bit of progress every day I worked on the game, the visibility of the progress kept you motivated and people cheering you on as you stumbled along helped motivate.

... However as we all we know, visible progress can only go so far, there must be some days when you work on tasks that take multiple days or simply don't give you much visual indication that anything had changed at all, still I endeavoured to post about my progress even on these days in order to keep things going and not feel like I was slipping off the train.

It did mostly work out in the end too, however demotivating it was to spend such a large amount of time on UI/UX and things I knew were necessary, but took so much time for seemingly so little gain. (having tested the game in the days in between, there were a number of things, mostly controls and UI related that popped up as being obvious things that needed solving, some of which are still yet to actually be solved).

One of the things I figured out in the process was both how to write a simple AI for a game like this (something I'd never done before until this moment!), but also that however simple and obvious you think your UI is, it most likely just is that way to you and to anyone else it is absolutely inscrutable, as we can see from the following:

Some time around the 16th/17th October I fell off the wagon a bit and it took until the 21st when I felt I was "properly" on the way again, as the main task at hand was UI I wasn't incredibly motivated, so procrastination ensued and suddenly days had passed!

The days after the 21st however were all rather productive and I worked in gamepad support, realised there wasn't enough time to get gamepad navigation in the actual UI system (because I'm using LÖVE and nobody has a complete functioning UI library for it that does everything you need, you end up building half yourself), and at this point mostly resigned myself to being happy with having gamepad support for ingame.

The last few days consisted mostly of more tweaking, as most of the game had come together at this point (even if you may consider parts of it to be of dubious quality, it was nonetheless rather playable) so I instead fell back on polishing the roughest edges of the UI and experience interacting with the game.

All in all, I'm fairly happy with how Devtober went, though I could have worked on the game more consistently some days and probably achieved slightly more progress, I don't particularly regret slacking off a few days as enough progress was still made to at least make a reasonable first submission! (much better than burning out certainly)

Lastly, one useful thing to keep in mind for anyone reading that helped me throughout was to keep a backlog of small but relatively simple tasks you could work on when you were making little to no progress on the huge seemingly immovable obstacles that might take days or weeks to finish completely, the small tasks are very helpful for a little gratification to keep you going and chipping away at the bigger things!

Much gratitude to Ellian for the wonderful opportunity to have this open-ended sort of jam!

zööp your enemies to oblivion (for 1-4 players!)